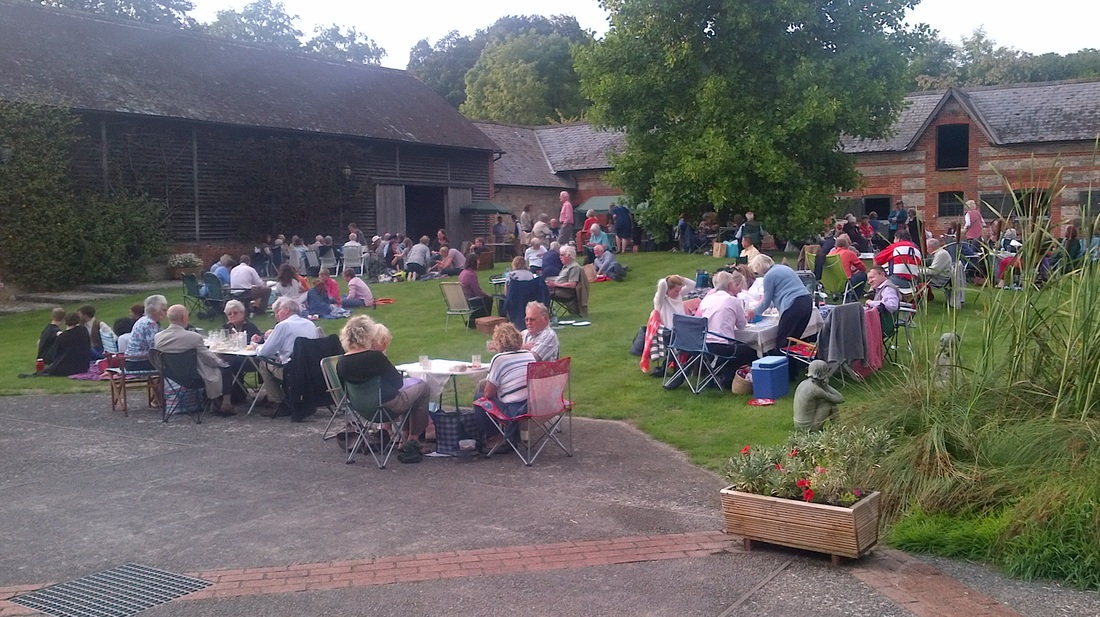 This year we had planned to perform William Boyce’s serenata Solomon, but of course Covid 19 intervened. We hope that we will be able to do it in 2021.

​
Opera at Chilmark performed The Spring, created by James Harris, in the Salisbury International Arts Festival on Sunday 2 June 2019 before two full houses.

Two years ago we re-created this work at Chilmark and it was very warmly received. It is a pasticcio, that is to say the music is from a variety of composers, with new words. Harris, who lived in Malmesbury House in the Salisbury Cathedral Close, both chose the music and wrote the libretto. Pasticcio was a popular art-form in the mid 18th century.

The work was given three performances in Salisbury in 1761, one in the annual Salisbury Musical Festival, and then was taken to London by David Garrick where there were five further performances at the Drury Lane Theatre in 1762. Thereafter it was occasionally performed around the country but then gradually disappeared from view. Detailed work by Nigel Wyatt* on the cultural life of Salisbury in the 18th century revealed that there remained a score in the Cambridge University Library, and from this he created a modern performing edition.

One reviewer wrote that Harris was a 'canny picker of very good tunes' and certainly it proved an audience-pleaser at Chilmark - one member of the audience wrote 'I think that is your best yet. It was so bright and cheerful and we all left with singing hearts. Jan [the director] has done a great job in reviving that lost opera.'

As always, soloists were joined by the company's chorus, orchestra and dancers.

The two performances, at 2.30pm and 7.30pm on June 2 were in the Medieval Hall in the Cathedral Close - just a few hundred yards from where the opera was created.

*Nigel talked about the annual Salisbury Music Festivals of the 18th century on Saturday 1 June at Salisbury Museum in the Close.

A review of the opera by David Beaton:

The Spring or Daphnis and Amaryllis, a long-forgotten opera, was performed to a packed house and to great acclaim by Opera at Chilmark, directed by Jan Koene, in the Medieval Hall, Salisbury Cathedral Close on Sunday 2nd June.

Note that location and timing were a key factor in the revival of this eighteenth century piece; location, because the first private preview performance, in July 1761, took place in Malmesbury House in Salisbury Cathedral Close, where the composer James Harris lived; and timing, because it went on to be performed in August of the same year at the Salisbury Music Festival, just as Sunday’s performance was part of this year’s Festival.

The opera went on to be staged on numerous occasions right up to the end of the nineteenth century, at which point it fell out of fashion. A highlight in its performance history is that it was commissioned to be performed at the Theatre Royal, Drury Lane by no less a personage than the actor and impresario David Garrick.

And I can think of no better way of introducing how it felt to be at the opening night of this revival production than to quote part of a letter from the composer’s mother, Elizabeth Harris, to her son after the Drury Lane performance. She wrote: “The Spring began with the usual overture on the drawing up of the curtains; there is a pritty [sic] pastoral scene with (I should think) near sixty shepherds & shepherdesses.”

Could there have been that many on the Drury Lane stage? In our case, no curtain was drawn up and we were met by a mere dozen, but the dramatic effect was the same; the colourful rusticity of their attire charmed us all and drew us quickly into the bucolic atmosphere of another era.
The principals (Daphnis – James Rhoads, Amaryllis – Claudia Wood, Damon – John Pumphrey, Phyllis – Nick Ogborn, Corydon – Ned Pattenden) sang with great aplomb and many, if not most of the arias were accompanied by a quartet of dancers, ably led and choreographed by co-director Rebecca Seymour. The dancers’ routines lifted the music on to another plane by mirroring the sentiments expressed in the libretto.

The 11-strong band, leader Alison Townley, directed by harpsichordist David Davies, was placed stage right, making the players visually an integral part of the proceedings as well as providing expert accompaniment throughout for arias, chorus and recitative.

The manuscript score of the work was discovered at Cambridge University by Nigel Wyatt, violinist, and it is to him that we owe the re-appearance of the work for modern audiences. Nigel prefaced the start of the performance by explaining the political undercurrent – the chief character, Daphnis, has been called up to fight in the militia against the French in the Seven Years War and he is going to have to part from his beloved, Amaryllis. At the time, in 1761, a peace treaty was being proposed, ceding considerable territories to the French, and many people were bitterly opposed to this. Indeed, when it came to the aria ‘See peace descend’ the celebrated tenor, Thomas Norris, was hissed, very probably because some members of the audience disapproved of the peace negotiations going on at the time.

There was no hissing on this occasion, because the entire show was a joyous re-creation of how concertgoers would have experienced performances in a bygone age, showing off to great effect the manifold talents of Opera at Chilmark (who are celebrating, as it happens, the fifteenth year of their operatic productions, which have included two first performances and a first modern performance).

The appreciative audience went out into the night, greeted by the magnificent spectacle of the floodlit cathedral and feeling all the better for a thoroughly pleasurable evening’s entertainment. Would we have been equal to the task for what appears to have been the norm at the Annual Musical Festival at Salisbury in 1761? At the end of the advertisement it proclaims (with an early version of an emoji, a pointing hand): A BALL each Night, as usual.