No one knows who wrote Beowulf, when it was written or why. With 3182 lines, it remains a hard slog. Yet it is very important. It represents the birth of English literature and sweeps up ideas drawn from Norse and Celtic myths with the odd biblical reference thrown in.

Now Cantata Dramatica has commissioned a new work, performed by Opera at Chilmark, which makes the story one we can get to grips with without too much effort. Hidden in all those words is a straightforward tale. An ambitious young visitor kills not only Grendel the troll, which has been terrorising a neighbourhood but also the troll’s mother. Brave - very brave. He gets all life’s prizes and ends up a king.  However, many years later a dragon appears. Beowulf is older and weaker but, refusing help except from a close kinsman, he takes it on. He manages to stab the dragon but is mortally wounded in the fight.

The librettist, Nick Pitts-Tucker, has drawn from many interpretations of Beowulf, notably that of Seamus Heaney, but has, in a modern take, included some prominent roles for women - as of old it had been very much a lad’s tale. The composer, Louis Mander, who wrote the well-received folk-opera Wild Edric given its premiere at Chilmark in 2013, has produced another outstanding score.

His music has all the pace expected from a contemporary composer. Avoiding a jumble of sound, he uses well-established musical conventions, such as the use of folk music and melodies which recur to represent characters or events. Even on a first hearing this opera lies easily on the ear and enhances the telling of the story. Beowulf becomes a pleasure anyone can enjoy.

All stories need to be clearly told and the central characters of the Minstrel as narrator, The Old King and Beowulf were given with confidence and dramatic intensity by Caspar Lloyd James, Steven East and Thomas Colwell.  Jillian Bain Christie as Queen Wealthow and Fae  Evelyn as Queen Hygd gave a measured and more gentle edge to the opera. The young Princess Freawara was sung with great assurance by the equally young Hannah Haupt. In a clever twist the trolls and dragon were represented not as voices but by a group of four dancers ducking and diving through the audience and on to the stage.

Opera at Chilmark has a growing reputation not only for musical excellence but also for successfully bringing new operas into the repertoire. With the start they have given it, Beowulf is set fair to attract a wider audience.

- - - - - - - - - - - -
As a newcomer to Opera at Chilmark, I was amazed when I finally arrived at the beautiful farm location, and the gorgeous barn given over to the company for a week. It is a true hive of industry as the company get the whole production together in just under a week: stage building, lighting and direction… brilliant focussed energy.

I arrived as composer Louis Mander was explaining the leitmotifs he used for various characters, as well as director Jan Koene describing the sense of having a “series of problems to solve” which putting on an opera can so quickly throw up.

The ensemble of 9 musicians, conducted on successive performances by David Davies, musical director, and Louis the composer, included some great instrumental colour; most notably various saxophones (all played with aplomb by Jo Hind) and much percussion, including vibraphone, xylophone, and a host of untuned instruments, played deftly by Joe Kemp and Paul Williams.

The overture laid out the sound world for the piece, with echoes of Kurt Weill’s music theatre works, before the minstrel/narrator (Caspar Lloyd James) began telling us of the Kingdom of Hrothgar beset by the evil troll, Grendel. Interestingly, all the solo male voices were either baritone, bass baritone or bass.

Simple, but very effective staging; a right-angled wooden back wall, with benches around,and using the Chorus to create Beowulf’s (Thomas Colwell) ship around him whilst they sang, worked extremely well.

The first challenge, where Unserth (Felix Hauser) questions Beowulf’s heroic abilities, used the four dancers (choreographed and led by Rebecca Seymour) weaving lithely around the hero, representing whales and sea creatures. The challenge dismissed, King Hrothgar (Steven East) and his Queen Wealthow (Jillian Bain Christie) welcome Beowulf and his companions and the company got stuck into the rollicking Mead chorus.
The beautiful young Princess (sung by youngest member of the cast, Hannah Haupt) was introduced and her back story, of being given for a political inter-clan marriage, is explained. The Minstrel sours the evening by imagining that the rivalries would still remain after her marriage, but Beowulf silences him with a pithy retort “Let us live in the present! The future’s afar.” A very nice touch of the Queen gently repeating “My Lord, let us sleep now” until the hall falls quiet…. but the silence is broken at 3am by the dread cries of Grendel - physicalised by the dancers once again, using shrieks and assorted vocal sounds, rushing in and attacking, exiting with Beowulf in pursuit. Lively, tight scoring here played very well by the ensemble.

After the extended picnicking interval (extremely civilised) we plunged back into action, with the giant arm of Grendel being proudly displayed by the court, and learning Grendel has slunk away to die in his lair. But the dancers return, black haired this time, as Grendel’s mother, spitting and crying. They attack and take the arm back again. The Chorus then led the hunt “run, run run, fresh blood I see…” punctuated with great percussion writing, until our narrator/minstrel explains how Beowulf has to jump into a dark, dark pool following Grendel’s mother (the swimming prowess useful for this mission!) and finally manages to defeat her. He then returns with Grendel’s head, which is displayed at the Court and more celebrations ensue, with the Chorus singing the marching song of the returning hunting party, and the King and Queen thanking Beowulf with “mountains of treasure’ but noting that Honour and Wisdom are the greater treasures.

The third act is set in Beowulf’s homeland and opens with Queen Hygd (Fae Evelyn) singing of how she has been married to Beowulf for some 30 years, and how time has diminished his strength a little. This act musically was the richest, as it progresses from the final fight and hunt of a dragon, once again portrayed by the four dancers, to the mortal injury of Beowulf, through to his death. One warrior, Wiglaf, stays true with the hero and assists in defeating the dragon. Beowulf’s final aria was very moving and beautifully scored with a late Romantic feel washing through to the last Chorus number; singing their farewells to the great hero.

Cantata Dramatica, who commissioned this work, have a brief that “(Almost) all of our commissions tell a story and are designed to be understood by the listener at first hearing.“ So the overall sound world is modern tonal, but accessible. I think this is an excellent way to encourage audiences to engage with new music - and Louis Mander’s Beowulf is sure to be heard many more times. Well done everyone involved with this exciting production. 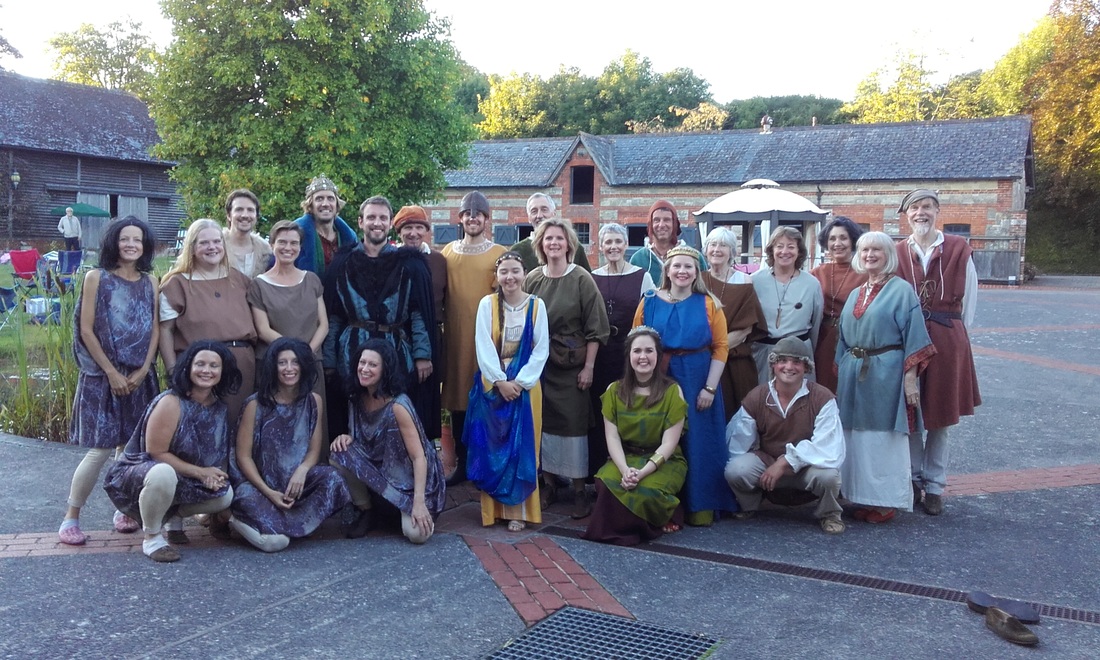